Old Phuket Town is the historical part of Phuket City on the island of Phuket in Thailand.

Being one of Thailand’s oldest city, Phuket history can be traced back to the time when it had an important role for Chinese immigrants landing on the already busy seaport of the Malay Peninsula. Having been ruled at some time by Portugal and Holland, both these countries have left their mark on Old Phuket Town buildings. The architectural influence of both these countries as well as the more modern Chinese influence, during the tin mining period, is called the “Sino-Portuguese” style and is proof of the “former glory” and the prosperity the town once enjoyed.

Old Phuket Town covers a few blocks in the center of the city with Thalang Road as its main street; other streets include Phang Nga, Krabi, Dibuk and Yaowarat roads as well as the once infamous Soi Rommanee (the former red light district) which translate from Thai into “naughty with the ladies”.

This is the same street which transformed itself, in recent years, into what many consider one of the most romantic small street, where future brides and grooms go for their pre-wedding photo shoot. Repainted, refurbished and with no electric cables dangling, sometimes dangerously, from the wooden poles, it was the first Soi (lane) to undergo major transformation. All the other mentioned streets were also refurbished and their buildings converted into shops, hotels, restaurants and museums.

Old Phuket Town is now a very pleasant area where you can appreciate all these beautiful Sino-Portuguese shop houses while shopping for this souvenirs which will remind you of this unique place; or you might feel the need to taste one of their local cakes with a coffee; or even try one of their special Phuket “spicy” Thai dish (and when we say spicy, we mean it!).

Here we would like to take the occasion to mention “The China Inn”, with its own little backyard, as a nice little place where you can sit and fully enjoy the peacefulness of the area while ordering some special dishes or just a coffee. 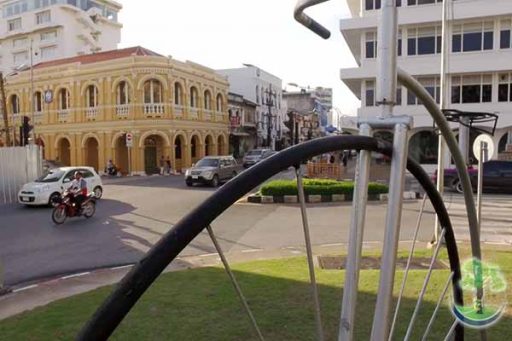