Phuket Floating Market in Kathu has ceased operations end of 2017.

The Phuket Floating Market is the first and only artificial floating market on Phuket Island. Besides The Kathu Shrine and the nearby Wat Kathu, there is now one more reason to make a stopover in Kathu before you head to the airport or other destination south of the Phuket international airport, Phuket town, Wat Chalong or Big Buddha: The Phuket Floating Market. Opened in May 2016 the newest addition to the visiting attraction in Phuket is not easy to be missed.

A giant Ganesh in black with gold coloured design will greet you when you enter the huge parking lot. While Ganesh is known by many attributes, Ganesha’s elephant head makes him easy to identify. Ganesha is widely revered as the remover of obstacles, the patron of arts and sciences as ell as the deva of intellect and wisdom. Ganesha was a deity particularly worshipped by traders and merchants who went out of India for commercial ventures. The period from approximately the tenth century onwards was marked by the development of new networks of exchange, the formation of trade guilds, and a resurgence of money circulation; it was during this time that Ganesha became the principal deity associated with traders.

Coming from the Kathu – Patong junction on Samkong-Kathu Road, Caltex gas station should be on your right, once you turn left it is about one kilometre. Built on a former tin mining ground the floating market resembles the tradition of authentic floating markets like the ones in Bangkok. Not as big it still attracts a constant stream of visitors who want to do their souvenir shopping at this unique place …and there is a lot to find. From more traditional clothing to modern, youthful apparel. Shopping makes hungry. Relax. You are covered. Little coffee shops, fresh fruit juice bars and traditional Thai restaurants will cater your needs. You can even rent a small boat that takes you and your kids at a very relaxing, safe speed around the artificial pond. Traditional Thai dancing and Muay Thai demonstrations will be performed at various times throughout the day. 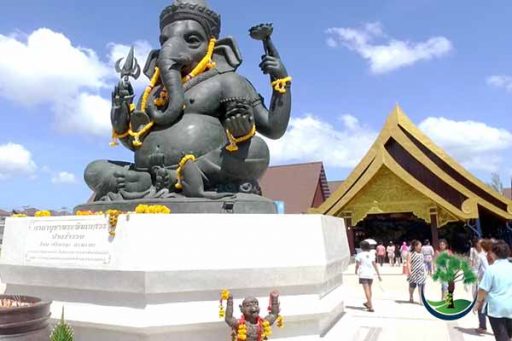