About the St. Joseph’s Church Phuket:
The church was named after St. Joseph, patron and protector of the Catholic Church.
Bishop Joseph Prathan Sridarunsil, head of the Catholic Church in Southern Thailand was the patron of the project to build St. Joseph’s Church in Phuket. The diocese of Surathani acquired the piece of land in Soi 8 Pasak,, approximately 3 rai in size, in April 2010, on which the church now stands.

Construction of the St. Joseph’s Church Phuket began in August 2013 and was completed in June 2014. The design, drawing and layout to which the St. Joseph’s Church Phuket was being built has a normal capacity of 180 in the main area of worship and incorporate in its design, features which will allow the capacity to increase substantially to cater for the seasonal surge in attendance numbers on special feast days such as Christmas and Easter.

Two small chapels of the St. Joseph’s Church Phukethave been incorporated into the design to more efficiently cater for occasions when attendance is expected to be significantly less, an example being daily weekday Mass. The design of the church complies with specific design features required by the Catholic Church and some of these would include a sacristy, baptismal font, confessionals etc.
The two smaller chapels are used for conducting catechism classes, bible studies, individual and group spiritual counselling, Couples For Christ, and community get-together’s to name a few.

A separate residential structure has been built within the grounds to house the parish priest and the church caretaker and designated car parking spaces will be provided to meet the needs of the congregation.
Whilst the primary reasons for building the new church was to create a center from which the spiritual, liturgical and pastoral needs of the local Catholic community are met, the needs of Catholic visitors to Phuket are taken very much into consideration.

Parochial Vicar (Priest)
James Batt arrived in 1995 as head of the Laguna Hotel Properties and together with his wife Angie, became well acquainted with the beloved late Father Richard who passed away in August 2011. 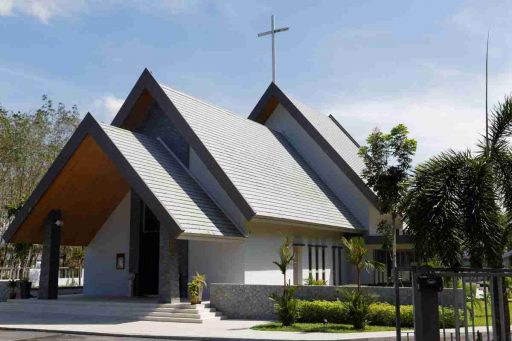