The Monkey Temple Phang Nga or Wat Suwan Kuha is a temple in a cave 12 kilometres outside of Phang Nga Town in the Phang Nga province,Thailand.
The Suwan Kuha Temple or Wat Tam (cave temple) is easy to reach from Phang Nga Town on the route 4 while going towards Phuket by either public transport or by a tuk-tuk/taxi ride. If you choose to use your own mode of transportation, do follow the sign which says “Raman Waterfall National Forest” and, about half a mile into the road, you will see the temple area with a huge parking space as well as probably a lot of tourists in minivans and/or tour buses. There goes the individual experience 🙂 But if you arrive around nine or ten you still might be able to have more or less the whole place to yourself.

Being known as the cave with a big reclining Buddha inside a cave, it is also called the “Monkey Temple”. Even if in reality the monkeys have nothing to do with the temple. They are just there, coming down the limestone mountain, waiting for busloads of tourists to buy bags of nuts from the vendors, having their stores built right at the edge of the parking lot, and feed them. Never being close to a monkey? Here is your chance!

Tam Yai is the name of the cave, approximately 20 meters wide and 40 meters long, in which various Buddha statues of different sizes are placed. The the big one is a golden, around 15 meters long, reclining Buddha. Build a the end of the 19th century it also contains various Buddha statues and images. The Na Takuathung family, founder of the first shrine ever to be built in this cave, also happens to have their final resting place in here: A big Chedi actually contains their bones.

The entrance fee is surprisingly cheap: 20 THB. Which is more than reasonable! 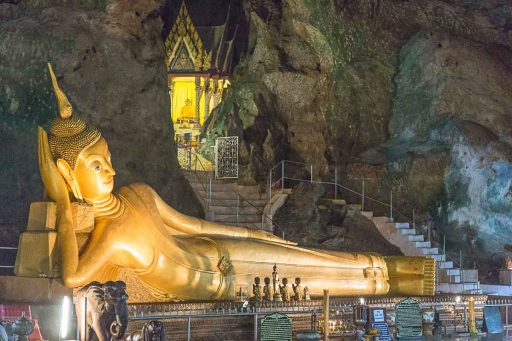